The current outbreak of the Coronavirus or COVID -19, will once again see community healthcare workers (CHWs) place their bodies on the frontline. Despite their historical protection of communities and delivering public healthcare, the South African government refuses to implement the Labour Court ruling (2018) that CHWs are permanent employees of the Department of Health (DoH), and continues to exploit CHWs as ‘volunteers’. Will the COVID-19 pandemic be a time of reckoning and recognition for CHWs?

At the height of the HIV/AIDS pandemic South Africa’s national healthcare system was in crisis, converging with catastrophic levels of unemployment (a consequence of neoliberal restructuring), poor nutrition, increasing poverty and the legacy of apartheid. The government declared 2002 ‘the year of the volunteer’ and the DoH recruited thousands ‘to volunteer’ and provide healthcare to communities. This was a quick-fix solution to a social crisis emanating from government’s neoliberal policies that were initiated in 1996. Amongst others, these policies implemented state budget cuts and privatisation of basic services like healthcare; nursing colleges were closed and the training of nurses was relegated to the private sector. Through the dedication of CHWs – walking door-to-door in communities, providing support to family households (medication, awareness raising, sometimes food from their own pockets, washing and caring for patients) – the pandemic was overcome. By 2004 the number of CHWs had reached almost 40 000 in response to communities’ need.

The pandemic imposed additional challenges for communities and society: the creation of orphans, child-headed households and grandparent-grandchildren households. Deepening social inequality and poverty stretched the social fabric of families and communities. Government’s palliative social grants prevent abject poverty and starvation; with currently more than 17 million grant recipients, this indicates generally low income and communities’ vulnerabilities. The CHWs role has expanded from healthcare to encompass the social reproduction of communities (children, elderly, disabled and the vulnerable).

The CHWs are predominantly black women, relatively young, ‘born frees’, between the ages of 20 and 40 years. Many have matric or high school education, with little opportunity for continued education due to financial constraints and inadequate state support. The majority are single women with children and their main source of income is their stipend (now R3500 per month in Gauteng). The CHWs share the same conditions of poverty and social inequality of their communities, and this explains in part their commitment to their communities even when no stipend is forthcoming.

Since 2002 the CHWs have become integral to the country’s two-tiered health system: wealthy well-resourced private healthcare for the rich and the middle classes; and impoverished, ill-resourced and chaotic healthcare for working people who carry the burden of disease in this country. Despite the ANC’s National Health Plan (1994) the quality national public health system based on full employment, trained personnel and adequate facilities has not materialised. In 2004 the government introduced the term ‘Community Healthcare Worker’ and acknowledged their strategic role in the ailing health system together with a national resource plan (2006) and a National HIV/AIDS Strategic Plan (2007). The CHWs, now 70 000 in number, are the backbone of the national health system, that is still based on ‘volunteerism’, inadequate training, and poorly resourced. This is the nature of healthcare for the majority in SA.

Although CHWs have to renew their contracts annually, they are not the precarious casual worker usually associated with neoliberalism. That is, they have regular work, they go to work every day for the same period of time, they work in the same workplace (local clinics) and most have worked for the DoH for between 5-10 years (and some have worked for 15 years). The CHWs do the same work as nurses. Although not based in the clinic, they provide healthcare to every household in the community. Although their DoH training is irregular and inadequate, the CHWs compensate for this with the skills and experience informally acquired and serve communities under dire conditions.

These resilient and fearless workers (predominantly women) have demonstrated that it is possible for ‘volunteer’ workers to organise themselves and make enormous gains, without a trade union, and outside the dominant industrial relations that excludes them anyway. This challenges the underlying perspectives that hegemonises the trade unions model and demonstrate the possibilities of precarious workers organising themselves under neoliberalism. The CHWs struggles have been non-violent and in defence of communities’ healthcare and related needs and this is possibly informed by CHWs being predominantly women workers.

The CHWs requested Khanya College’s support in 2010. Khanya is not a traditional NGO and its work is oriented to movement building, to assist working people to act and take control of their own lives. Initial challenges included encouraging CHWs to self-educate and self-organise, to take themselves seriously, to take ownership of their own struggles and to build a collective. Emphasis was also placed on the basic building blocks of organising, punctuality, respect for everyone, recording and implementing agreed decisions, organising CHWs in all the clinics, collective decision-making and accountability. Khanya provided supportive assistance such as education and training and capacity building on labour legislation, and campaign skills etc.

In 2012 the CHWs organised a successful and important strike that led to a 100% increase in their stipends, from R1000 to R2000, although still below a living wage. The strike led to CHWs being transferred from local NGOs to clinics under the Gauteng DoH in 2013, and the direct payment of their stipends by the Gauteng DoH, a long-standing demand. This strike boosted morale and self-organising initiatives. The CHWs became bolder and wanted to form an organisation.

Together with Khanya, CHWs engaged in discussions on different organisational models to accommodate their needs and those of communities for healthcare and broader social and service delivery issues. This approach set the CHWs apart, and brings the union form based on individual membership into stark relief. Besides tendencies to hierarchy and male dominance, the union model is an industrial one based at the point of production, and impedes consistent linkages to struggles of social reproduction and broader community needs.

The current industrial relations machinery also imposes the focus on unions and members only in full-time work. This excludes precarious workers, and reflects the failure of unions to respond to casualisation taking place. The Public Service Coordinating Bargaining Council (PSCBC) also has high thresholds that prevent participation of smaller unions. Similarly, NUPSAW, a union in the PSCBC which organises CHWs, made no gains to advance CHWs’ interests. Given the CHWs approach, the union form was found wanting, too inflexible and too narrowly focussed.

In 2014 the CHWs decided to form the Gauteng Community Health Care Forum (the Forum) to cater to these needs. The Forum is a flat structure and enables CHWs to defend their interests and to campaign with communities. The Forum’s Constitution acknowledges the composition and role of women, and all structures must reflect 75% women representation.

In February 2016, the Forum tested the CHWs employment status at the South African Labour Court. Judge Paul Benjamin’s landmark ruling confirmed that CHWs are employees of the DoH. Following the Benjamin judgement, the Forum launched a dispute in the Public Sector Health and Social Development Bargaining Council in terms of Section 198B of the Labour Relations Act. The Forum argued that CHWs are employees of the GDoH on continuous or indefinite contracts. After two years of arbitration, in 2018 the Council ruled in favour of the CHWs. The Commission for Conciliation, Mediation and Arbitration (CCMA) certified this decision in January 2019, and it has the status of a Labour Court decision. Although the South African government continues to violate its own Court rulings and its failure to make CHWs permanent employees, the CHWs have made tremendous gains as a Forum, ‘outside’ of the industrial relations framework. These gains are applicable to CHWs nationally and hence the South African government’s refusal to implement them.

Once more the DoH and the country calls on CHWs to assist in the protection and defence of community healthcare in the face of COVID-19. Internationally, many health workers have succumbed to the virus in the line of duty and South Africa will not be an exception. Although CHWs are committed to defend communities against the COVID-19 pandemic, the public needs to supports their plight, and oblige the South African government to recognise the employment status of CHWs, anything less would be a betrayal. This is also an important step in developing quality public healthcare for all working people.

Re tla dula re direla setjhaba! We will continue to serve the nation! (Slogan of the Gauteng Community Health Workers Forum)

Next SASSA Response To Outbreak 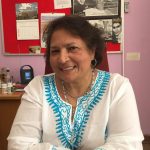 SAFTU and affiliated Unions react to the passing of bills

Feminists Raise Awareness about Gender Based Violence Through Posters

Day 3 of the Coronavirus Lockdown in Carletonville 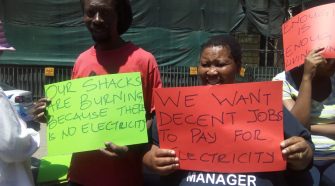