Although South Africa is known as the world capital of protest, in recent weeks protests in the townships of southern Johannesburg suggest that ordinary people have had enough of unfulfilled promises by the ruling party, corruption and certainly their worsening living conditions. Traffic flow in and out of several townships was interrupted, tyres were seen burning in the streets, part of the Golden Highway was closed down for sometime by residents of Freedom Park and Eldorado Park, and ongoing clashes with police, who shot rubber bullets and teargassed protestors, could be seen on national news networks. Schools in the areas affected were also forced to shut down.

During the week of 7-12 May 2017, demonstrations and protests took place in Ennerdale, Kliptown, Bosmont, Westbury, Finetown, Eldorado Park and Freedom Park. Residents from these areas took to the streets over issues of lack of service delivery, housing and access to land. Residents say their areas are overcrowded, with three generations in a family having to share the same small house, sometimes together with an uncle and an aunt as well as their children.

About 17 people were arrested, while another five were badly injured with two hospitalised. Residents took the matter to court, and in order to verify conflicting accounts of whether the piece of reclaimed land was fenced or not, the judge visited the site of occupation.

On inspection, the judge found that the area had only recently been occupied, which conflicted with the original argument of the Freedom Park residents’ legal representation: that they had occupied the area for six months. The occupation of the piece of land had not been continuous, which according to the judge meant they must have been staying elsewhere before coming to occupy the area.  Considering this, Freedom Park’s legal representation felt it best to withdraw the case.

Unfortunately, the law, as cited by the judge in the case, ignores the fact that members of the community who stay in backyards, are renting, stay in shacks, or live in overcrowded houses began occupying the state-owned land because their greivances about adequate housing had not been addressed.

Residents of Eldorado Park also participated in service delivery protests in the week of 7-12 May, raising their own griviences, with access to land and housing being the central issues. An Eldorado Park community member present at a community meeting at the House of Movements in Johannesburg, complained about lack of development in the area, and said that “the government has let us down”. He cited the marginalisation and dismissal of Eldorado Park as a place infested with crime, drugs and gangsterism. Community members took to the streets on 7 May demanding land on which to build houses as the area is also overcrowded. Roads were blockaded and the residents watched overnight to ensure that no vehicles were able to pass. At the meeting, community members from various grassroots organisations and townships met to discuss progress, problems and to review a meeting with the Minister of Human Settlement and Housing, Lindiwe Sisulu, that was scheduled for the following day, as well as to find common ground.

It was reported that some tensions between ‘African’ and ‘Coloured’ people occurred, which threatened the strength of their community’s common struggle for access to housing and land.

Hyatt, a leader from Eldorado Park spoke out against tribalism or racism, warning about the consequences if that was allowed to take hold of the communities.

12 people have been arrested in the Eldorado Park protests.

In Ennerdale, Finetown North and Finetown Mereting the situation became violent and residents who form the leadership of the protests in the area are living in fear. Some have said they have been made targets.

Sisanda, a resident of Finetown, in the community meeting said that they do not have toilets and have to relieve themselves in the bushes. “This undermines our dignity,” she said. Electricity is also unheard of in the informal settlement of Finetown.

Though protests in Southern Johannesburg subsided after the week of 7-12 May, demonstrations and protests over service delivery and housing, have been taking place consistently since then in other areas of Johannesuburg, including Thokoza, Makause informal settlement and  Tsakane informal settlement in the East of Johannesburg, Diepkloof in Soweto, and Leratong, Toekomsrus in the Westrand.

Food prices up again in March 2017

Queues outside shops, banks and post offices despite rules against overcrowding 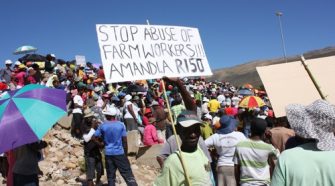