At the beginning of the ANC’s 54th Conference in December 2017, President Zuma announced that higher education would be free from 2018 for students from working class and poor households. The announcement partly responds to the demands of Fees Must Fall, and it will be a significant victory for the working class if it is implemented.

Working class and poor students have been redefined as coming from households that earn an annual income of R350 000 or less. Students from households with an annual income of up to R600 000 have been awarded a 0% fees increase for 2018. This hybrid “free” education plan will be phased in over eight years according to an announcement by Finance Minister Malusi Gigaba. The new policy will affect almost 90% of the university student population, and represents a major shift in government policy.

The announcement went against the recommendations of the Heher Report. The Heher Commission recommended that students be given loans by banks, and that students should repay the loan after they graduate. The Commission also proposed that the government should guarantee payment of  the loans to the banks if the students fail to pay.

The announcement by President Zuma was immediately caught up in the politics of the elective conference of the ANC. A number of commentators who supported Ramaphosa in the ANC elections were quick to argue that Zuma was using the announcement on the eve of the elections to boost the electoral chances of the so-called Radical Economic Transformation faction led by Nkosazana Dlamini-Zuma. A number of university Vice-Chancellors immediately raised the question of how the free education will be funded, and how it will work.

Although students welcomed the announcement, there was also concern that the annoucement was also aimed at boosting the image of the ANC among the students. In many universities across the country, student organisations affilliated to the ruling party, called the Progressive Youth Alliance (PYA), have lost Student Representative Council (SRC) elections. The chief beneficiary of this decline of PYA dominance has been the EFF’s student wing and the PAC’s student body, PASMA. Other students feel that the announcement may restore faith in the ANC as a party that can still serve the interests of the poor majority, despite almost 25 years of failure to deliver free and quality education.

The Long Shadow of the de Klerk Regime 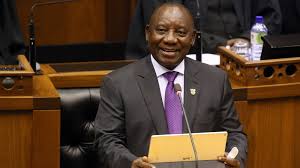 State of the Nation Address by President Cyril Ramaphosa