By Siyabonga Mviko and Karibu! Staff

About 40 workers embarked on a demonstration outside the L’Oreal South Africa premises in Midrand, Johannesburg yesterday (28 May 2020). The demonstration was a solidarity action led by the General Industrial Workers Union of South Africa (GIWUSA) and the South African Federation of Trade Unions (SAFTU) to expose L’Oreal SA’s blatant disregard for workers health and safety. This is according to the joint memorandum statement presented to L’Oreal SA officials and released publicly.

The protest was joined by shopstewards, workers from the plant during their lunch break, and workers from a nearby factory. GIWUSA’s Tinovimbanashe Gwenyaya told Karibu! that workers are currently subjected to hazardous working conditions during the COVID-19 pandemic. According to the joint statement made by GIWUSA and SAFTU, there are 10 workers who have tested positive for COVID-19 and yet the management of L’Oreal SA continues to force workers to come back to work. Gwenyaya said it could be more.

Gwenyaya said it has been about two weeks since the first worker at L’Oreal tested positive for COVID-19. When the first case happened, workers at the French company (which sells personal care and cosmetics products), requested that management shut down the plant, deep-clean it, test all workers and pause production while staff undergo quarantine. Three days later the Department of Health and came to the plant and immediately shut down the factory and tested all the workers.

But workers were called back to work before the 14-day recommended quarantine period and before test results had been confirmed. “The cosmetics company forced workers to go for a re-test, this time at a private facility, just to make sure that workers come back to work,” according to GIWUSA and SAFTU.

L’Oreal’s management has still not complied with the necessary safety regulations, which exposes workers and their families to the risk of infection.

Worse still, L’Oreal has reportedly brought in casual labour to perform the work that was done by workers who are infected so that production continues,without even testing the new workers.

The picket at the Midrand premises of L’Oreal SA observed all required physical distancing and other safety measures, Gwenyaya said. The union handed the memorandum of demands to the management of L’Oreal SA, who responded immediately by calling the police to disperse the gathering.

Gwenyaya said while the picket was taking place, L’Oreal sent a letter to GIWUSA through its law firm, Cliffe Dekker Hofmeyr. The letter addresses the industrial action, claiming it is an unprotected strike. “[For now] GIWUSA will not respond to the letter.”

GIWUSA and SAFTU “call on the Department of Employment and Labour to work together with the police to criminally prosecute L’Oreal management for its homicidal actions.” The joint statement also calls on the government “to regulate… and legislate that workers of L’Oreal can elect Worker Inspectors”,to help monitor factory floors and minimise risk of infection to workers. Other demands include that L’Oreal must shut down until all workers are free of COVID-19 and that there be no loss of income to workers during the shutdown.

This article was submitted on 29 May 2020. You may republish this article, so long as you credit the authors and Karibu! Online (www.Karibu.org.za), and do not change the text. Please include a link back to the original article. 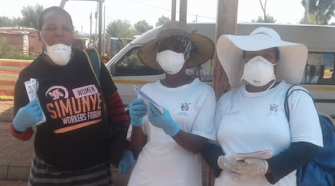