The governing Hindu nationalist Bharatiya Janata Party (BJP) won the most recent national elections but the party lost the regional elections in the state of New Delhi. The election counting ended on 8 February, with Aam Aadmi Party – translated ‘Common Man’ – retaining the region with a resounding 62 of 70 seats. The loss suffered by the polarising and divisive BJP has shows that Indian citizenry can reward politics that focus on material issues which stifle the shared goals and interests of working class Delhi Indians across religions.

BJP Polarises
BJP has been mobilising Indian citizens on the basis of Hindu nationalism. And on the basis of religion the ruling party has been polarising the country’s population along a hostile Hindu-Muslim divide. Under Prime Minister Narendra Modi, the BJP saw parliament pass the Citizenship Amendment Act on 11 December 2019.The act which amends the Citizenship Act of 1955 discriminates Muslims who constitute 14% of India’s 1.3 billion population. It makes it easy for illegal immigrants from neighbouring countries, who are Sikh, Hindu, Christian, Buddhist or Jain, to register as citizens of India.

The act, which was passed within 2 days at the end of last year, has drawn nation-wide protests together with the National Register of Citizens which is meant to identify India citizens from ‘illegal’ immigrants who will then be deported from India. The popular movement adopted a now-viral poem – which adapted from an Urdu poet Indori and a Bangladeshi slogan ‘We won’t show’ – from the comedian and lyricist Varun Grover who shared his piece which opposes the NCR and the AAC.

Protestors are using the slogan “Hum Kaagaz Nahin Dikhayenge” which means ‘We Won’t Show Our Papers’, as a criticism against police violence against protestors.

‘Common Man’ wins
The BJP was reported to be ahead of the incumbent AAP in Delhi after its landslide victory in the national elections in May 2019, according to many opinion polls. Modi’s party also lost regional elections in the states of Madhya Pradesh; Rajastan; Chhattisgarish, Maharashra. The defeat of BJP has been widely seen as a rejection of the party’s policies, especially their polarising stance. Bharatiya Janta’s Twitter handle was the cause of controversies too many times, appearing to mock the slogan ‘Hum Kaagaz Nahi Dekhayenge’.

Delhi is an important state in India, seen as a political face of the country and holds great historical significance, and a World Heritage site. Modi was desperate to win it, but BJP only came back with 8 seats out of 70. Aam Aadmi Party, first formed in 2012, won 62 seats retaining power in the cultural and economic capital of the country. The party led by chief minister Arvind Kejriwal first won the region in 2013 unseating Congress Party which won no seats this term.

Core Issues
The focus of the ‘Common Man’ is issues that afflict poor people in common. It’s campaign centred around providing on-going water supply; a patriotic curriculum in schools and an important step towards decentralising power – the party also promised a ‘Jan Lokpal’ or a Citizens Ombudsman meant to weed out corruption.

On the back of AAP’s strong campaign and victory was also achievements from the previous term where the party delivered on free healthcare for the poor. It also removed income barriers from health schemes making healthcare widely available. The quality of healthcare also increased. To be able to serve an increased number of citizens with the poor now accessing healthcare, the regional government is overseeing the expansion of hospitals, some to more than double their capacity.

The Arvind Kejriwal led party also cheapened electricity for Delhi citizens by deducting and paying for the cost of street lights which are connected to building owners’ electricity metres. True to the party emblem (broom sweeping corruption), the party also cleaned corruption in the power department to save costs.

Next Students Today: Reasons for Protests

Behind the lens: Remembering Muhammad al-Durrah, 20 years on

The Long Shadow of the de Klerk Regime 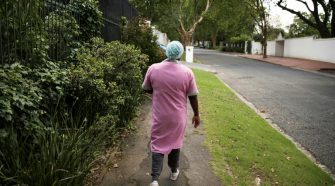