From 26 to 31 January 2017, the Gauteng Community Health Care Forum (the Forum) held a capacity building workshop, facilitated by Khanya College in Cullinan, Pretoria. 64 Community Healthcare Workers (CHWs) attended the workshop from clinics all over Gauteng, including Ekurhuleni, Johannesburg Metro, the Westrand, and Pretoria. The purpose of the workshop was to plan a way forward for the coming year, and to strengthen the organisation and its structures.

Oupa Lehulere of Khanya College opened the workshop, facillitating the discussions around the politics of the  Forum. The workshop then moved on to the history of the Forum. Zoleka Mbotshelwa, the Chairperson of the Forum, recounted how the CHWs began organising as early as 2010, and the Forum was founded in 2013, in response to a need to organise the community of carers around Johannesburg and greater Gauteng. The Forum has been holding meetings bi-monthly at Khanya College, a supporting structure, and they have run workshops to empower one another, discuss the politics around the Forum and health care in the South Africa.

The second instalment of the workshop entailed discussions pertaining to the Forum’s interim constitution. Here what the organisation stands for, how it operates, its identity, was debated and the various options explored through healthy debates. It is dedicated to tackling issues surrounding CHWs working conditions, but also the conditions of the public health system. There was also much fun to be had as well, as  Forum members showed their drama skills during the session on media, in which groups had to perform a scene showing their understanding of what the media is. This session was geared towards the participants understanding what media is, how it functions, and how the Forum can use it to further their goals and objectives.

On the third day of the workshop, Khadija Dawood of Khanya College conducted an interactive session on the legal rights of workers, as well as labour laws which CHWs need to know, and the various situations in which these apply. Various members reported what they now realised have been clear violations of the law, and many carers expressed concern about deductions in their wages, while they are unsure whether contributions to the UIF are actually being made. This has to do with the status of SmartPurse, as well as their own status with the Department of Health, since they do not receive pay slips.

It was inspiring to see how much determination, belief and political will CHWs have to continue with the struggle they are facing. Through their discussions of finding alternatives to the current state of the health care system, many brilliant and revolutionary ideas began to surface.

Next Health MEC Mahlangu resigns as Esidimeni Report is Released 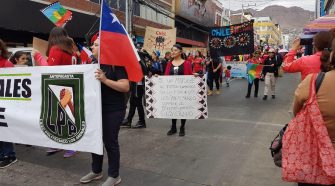