The Sugar Plantation Workers Union of Malawi (SPAWUM) has been doing workshops around issues that women workers face in the workplace. Most recently on 20 and 23 July 2019, the labour organisation held workshops in Nchalo and Dwangwa to raise awareness to issues of sexual harassment in the workplace. To prevent misunderstandings and excuses, SPAWUM also defined the types of sexual harassment. Raising consciousness around these issues helps draw attention to them in order to help eliminate them in line with the objectives of the workshops.

Briefly, the expectations of the participants were to learn about sexual harassment, to know more about SPAWUM and the International Union of Foods (IUF) and the role of women in trade unions; that in addition to wanting to learn and gain extra skills. The facilitators for the Dwangwa and the Nchalo workshops, Norah Bai and Alufai Matthews respectively, allowed the participants to give responses on what they thought SPAWUM to be but later explained that the trade union is “a voluntary, democratic, independent, permanent organisation”, which most importantly, is formed by workers, “to protect and improve their working conditions of service through collective bargaining”, says SPAWUM report.

The workshop further discussed the benefits of being a member of a union as well as the duties and rights of members. Participants divided themselves into commissions to discuss questions. The groups’ notes were later discussed at a plenary session followed by a summary of the notes sent to participants.

The second session focused on sexual harassment which facilitators called “un-wanted conduct of a sexual nature to both men and women. Thus, any unwanted sexual verbal or physical advance or insulting statements.” It was noted that sexual harassment, seen as a display of power by perpetrators over victims, causes “discomforts, humiliation”, and affects performance at work.

This problem is common in the workplace, intended to dominate, and in the majority of cases it affects women. Trade unions were urged to take seriously the problem of sexual harassment and tackle it like all labour issues since it is also an issue affecting working conditions and the physical and mental wellbeing of those who face it. Workers, mainly women, who have been affected by this predatory behaviour have either suffered humiliation, physical and or mental sexual assault. It is also common that those who refuse the advances of perpetrators termination of employment; transfers; biased evaluation of work performance, demotion but some resign as they do not want to face being harassed.

In the workshops it was mentioned that some of the psychological impact of sexual harassment is loss of sleep, anger, anxiety, depression, loss of dignity and respect. The participants were encouraged to work with employers to bargain with them to eradicate this problem. It was also advised that Collective Bargaining Agreements must state in no uncertain terms what the punishment for offenders should be and channels to raise grievances must be communicated effectively.

The workshop was a success. Participants learned about a variety of issues, including safety tips, occupational hazards and what constitutes sexual harassment. 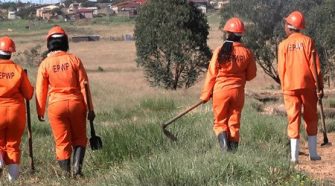