Over 40 activists from around different regions all over Gauteng convened at the headquarters of the Bez House at the offices of the South African Federation of Unions (Saftu) to discuss the crisis of electricity and other problems of the working class. Lebogang Phanyeko, the national organiser of SAFTU facilitated the meeting which was held yesterday, 6 February 2020 and was attended by civic organisations, representatives from political parties, communities and trade unions, as well as NGOs.

This meeting is the first of planned regular meetings by community representatives, organised labour and other working class institutions, to respond to the crisis which has been brought by Eskom’s decision to switch off electricity from a number of townships, including Soweto; the Vaal area; Vosloorus and elsewhere. The electricity monopoly further made threats to disconnect some municipalities should they not pay money owed to it.

Most people who attended the meeting said they did not have electricity for the past 8 months while others recently had their homes disconnected. Rufus Tshoke, a member of the Soweto Action Committee and iLungelo Lethu Human Rights Foundation, told the meeting that the area he comes from has been disconnected since at least May 2019. According to Tshoke, when the electricity connection was cut off Eskom officials told him that his household needed to pay R30,000 but when the electricity bill was sent a month since he had electricity the amount had increased and keeps increasing.

The Soweto Action Committee is questioning the R18 billion amount which has been widely reported as owed by the township, citing the presence of shopping malls and a stadium. King Sibiya, a founding member of the organisation said that they challenged Eskom to breakdown the amount which suddenly came down t o R5,5 billion*.

Sibiya also told the meeting that a section of Diepkloof will approach Eskom with the intention to pay a minimum of R100 each household to show the power utility that there is a commitment to pay electricity rates but that other issues make payment nearly impossible. “A flat rate of R100 or even R150”, from each household is a show of the commitment from the community.

In discussing other factors that complicate the crisis faced by communities who are being disconnected by Eskom around Gauteng, representatives of civic organisations such as the Gauteng Housing Crises Committee (GHCC) mainly operating in Joburg South, said that unemployment and land of access to land for residential purposes are big contributing factors to the problem of non-payment.

Shaheen Khan of the Socialist Revolutionary Workers Party and Thami Hukwe of the Abahlali base Freedom Park and the GHCC agreed that chronic unemployment means that more and more households cannot afford to pay rates, including water bills.

Housing was another big talking point in the meeting. The majority of households in Soweto and in many other townships, feature shacks at the backyard who also consume electricity. Mme Buthelezi said that “some people feel that the issues are interlinked and so they cannot separate the issues.”

The residents are already opposing Eskom on the legal terrain but plan to take on the SOE on the political front. Saftu, present in the meeting, are planning a night vigil on the 12th of February in Tshwane and there are other planned political activities.

The residents feel cheated because in 1994 the ruling party campaigned on and promised South Africans free basics that are necessary for every home such as electricity, water and even education.

There will be regular meetings on Thursdays starting 13 February 2020.

*Karibu understands that the amount owed to Eskom includes a significant amount of interest.

Next Khutsong Community ready to strike 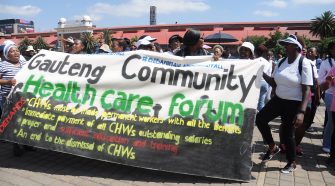