Informal settlements in Gauteng continue to receive little relief from formal budgets and little attention from the Human Settlements ministry it would seem, but the Electrification of Informal Settlements Campaign based in Gauteng, intends to change this situation. The close to 300 informal settlements – housing structures that are not in a backyard – around the province account for over a million people in Gauteng.

The Electrification campaign, starting in December 2018, aims to electrify all the settlements, with only a few of them having lights and even less having power to both light and cook. Most of the settlements have been there since 1994 but resettlements in to formal housing have not happened quickly enough. South Africans living in the settlements do not enjoy the basic services which were made possible by the 1994-transition.

As recently as 2013, informal settlements accounted for 14% of all households; while in the Johannesburg district they were 9%; 12% in Tshwane; 14% in the Westrand and 7% in Sedibeng.

Most informal settlements have access to piped water which is almost always a shared tap in the community, but only around 50% enjoy removal of waste, even less than that enjoy sanitation with only around 30% with electricity supply.

The campaign which has met every month since the start of 2019, has put together activists from informal settlement communities from areas such as Hammanskraal, Merafong, Ekurhuleni to Soweto and Lenasia. On the 21st of March activists involved in the campaign picketed on near the Gauteng Legislature on Rissik Street, Johannesburg with messages directed against the idea of privatising Eskom and raising awareness about the plight of communities in “permanent loadshed areas”.

Activists are from different organisations many of which are grassroots groups like the Gauteng Residents Association while others come from NGOs in the form of Khanya College; Oxfam SA; the Casual Workers Advice Office and others. Union federation SAFTU forms part as well.

The Electrification Campaign works in Gauteng currently. The campaign activists will be meeting again this April 2019 in Johannesburg.

Previous US Threatens Venezuela at UNSC as IMF Freezes Funds

COVID-19 takes a toll on the Waterdal community 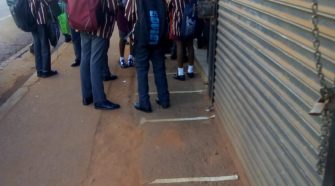 The Crisis of the 2020 Academic Year