120 social justice activists belonging to different social movements and NGOs met at Khanya College from 06 to 08 March 2020. The Khanya Constituency meeting opened with a film about the history of colonialism in what is now the Congo under Leopold II of Belgium. The film was discussed and reviewed early on Saturday. Comments from participants revealed shock at the horrors Leopold’s rule produced. Some activists thought the film showed that things have not changed in the last 120 years. The majority of the participants said the film showed why Africa is so poor. The continent’s resources are drained and sent overseas.

There was a presentation on the work that Khanya College is doing. Nosipho Mdletshe, who made the presentation, stated that most activists only relate to the College through just the field they are active in, remaining unaware of other avenues of struggle which the College is active in. Khanya has different projects, namely the Jozi Book Fair (JBF), Forum of Activist Journalists (FAJ), and ICT, Mass Advice Day as well as Finance and Coordination departments.

This allows Khanya to help organise youth and the broader working-class through reading and literature and activist journalism.

The highlight of the presentation was the recently launched Bathekgi bookstore. The store is another way the College will make available books at a lower cost for the working-class and poor. It also provides other benefits besides books for people who subscribe. Subscription is at least fifty Rands (R50) each month.

Working-class writers who do not have platforms may use the website – www.bathekgi.org.za – to advertise their books for a small fee when each book sells.

Comrade Luli Callinicos, author of Gold and Workers, joined on stage by comrade Justina of the African Reclaimers Organisation (doing recycling work) and comrade Puseletso Lebyana of the Simunye Workers Forum and the Casual Workers Advice Office. Callinicos discussed about she wrote her book.

Justina explained that she did not see reason to ‘celebrate’ the International Women’s Day. She highlighted the plight of working-class women.

Lebyana gave a message of support from the Simunye Women’s Forum saying that Khanya has played a crucial role.

Ambassador to Venezuela, Her Excellency Mairin Josefina Moreno-Merida informed activists that the Venezuelan government dedicates around 76% of its budget to social services achieving healthcare free, grants to all elderly citizens. The information was confirmed by a participant in the audience.  She also complained about continued attacks by the West on Venezuela’s and economy. She called the U.S. sanctions a crime against humanity.

There were only smiling faces when the Skype meeting with JBF patron and famed novelist Dr Zakes Mda took place. Mda told the activists how he was able to write the novella – Melville 67. Mda said it is important for youth to know the history of Africa.

Next FIRST CASE OF COVID-19 CORONAVIRUS REPORTED IN SA 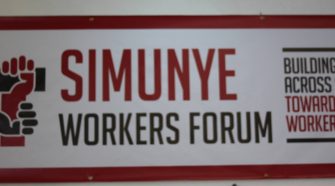